App design for VW ID.3 electric vehicle to enable the user to self-serve whilst reducing load on VW call centres.

Orange Bus along with Capita Customer Management conducted a workshop to improve Volkswagen Group’s customer service for their new, all electric, VW ID.3 vehicle. The design focused on two user journeys; First, the ability for the vehicle to diagnose its own faults and relay them to the app along with advice for the user on how to deal with the fault. Secondly the user being notified that their annual service was due and making a subsequent appointment for a service via the app.

The primary goal during this project was to reduce inbound call centre activity whilst enabling users to self serve in dealing with issues. In addition users could also utilise the app in locating charging stations (both green electricity and fossil fuel electricity) and promote use of electrical vehicles and car sharing via the Feature Awards scheme. This Feature Awards would award points to users to be spent on car related accessories, experiences and VW after sales services.

My task was to design the look and feel of the App based on whiteboard wireframes produced by UX designer Anthony Elstob during the workshop. The App’s styling was based on existing marketing collateral for the VW ID.3 vehicle (namely colour palette, gradients and typography) whilst focusing on best industry practices. I designed screens for the two user journeys along with additional screens showing locations of charging stations and user profiles with regards to the Feature Awards scheme. Finally an Invision iPhone prototype was created to demonstrate the refined user journeys to key stakeholders at VW UK and Germany. 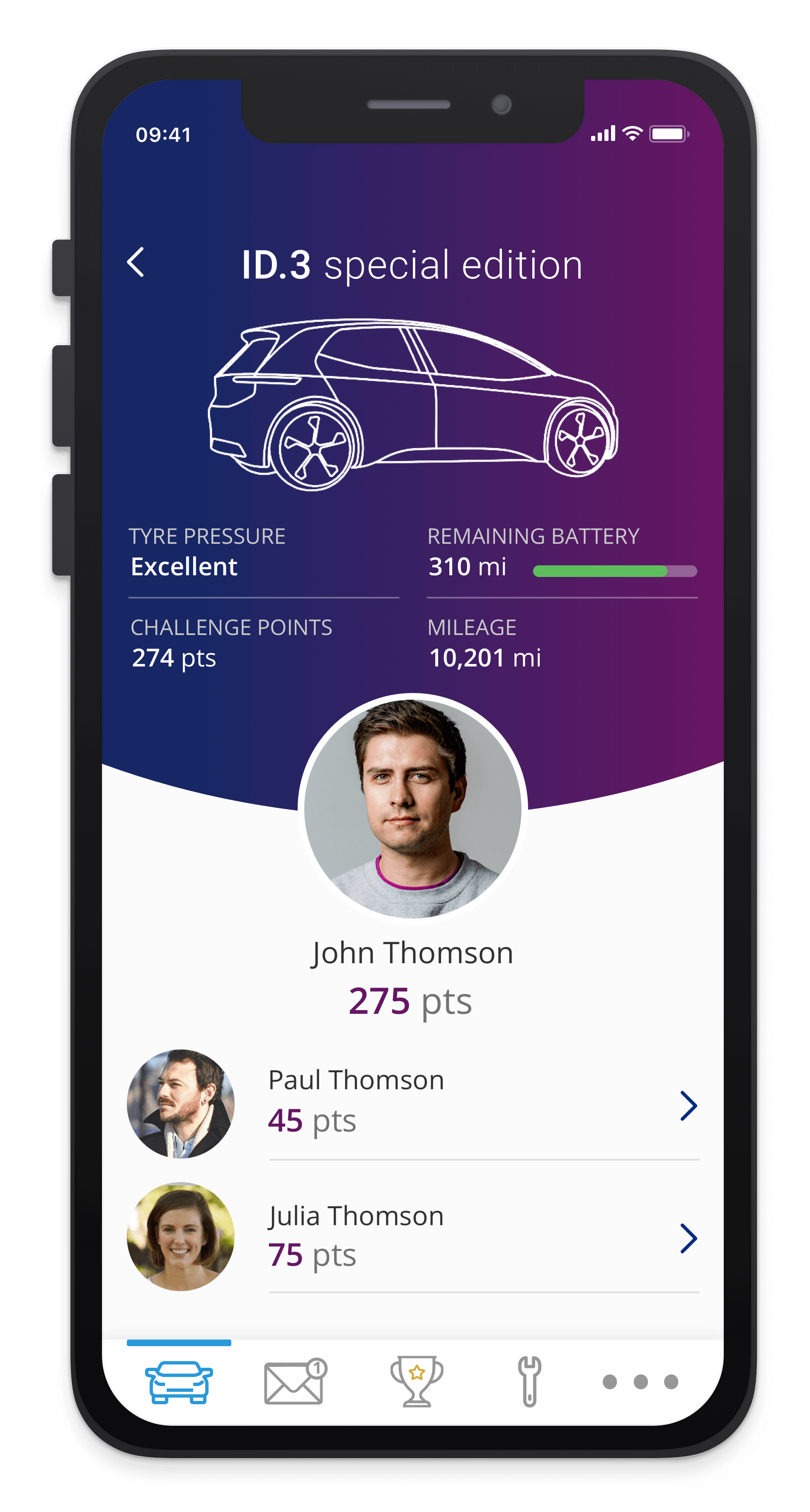 The diagnostic journey is centered around a battery fault with the ID.3 electric vehicle. This fault is communicated to the user and instigates a remote diagnostic tool which sends current vehicle data to a VW service centre. All the time the app is giving advice to the user regarding destinations that are within current battery range (such as the nearest approved VW service centre).  Following uploading of vehicle diagnostic data a video call can be made to help the user deal with the issue, or assist as a VW approved service engineer attends at the vehicle location.

The user is notified of issues with the car, specifically battery issues.

The users is requested to upload remote diagnostic data to a VW service centre.

Video chat with VW service centre to guide the user is fixing the fault themselves or arranging VW to attend at the vehicle. 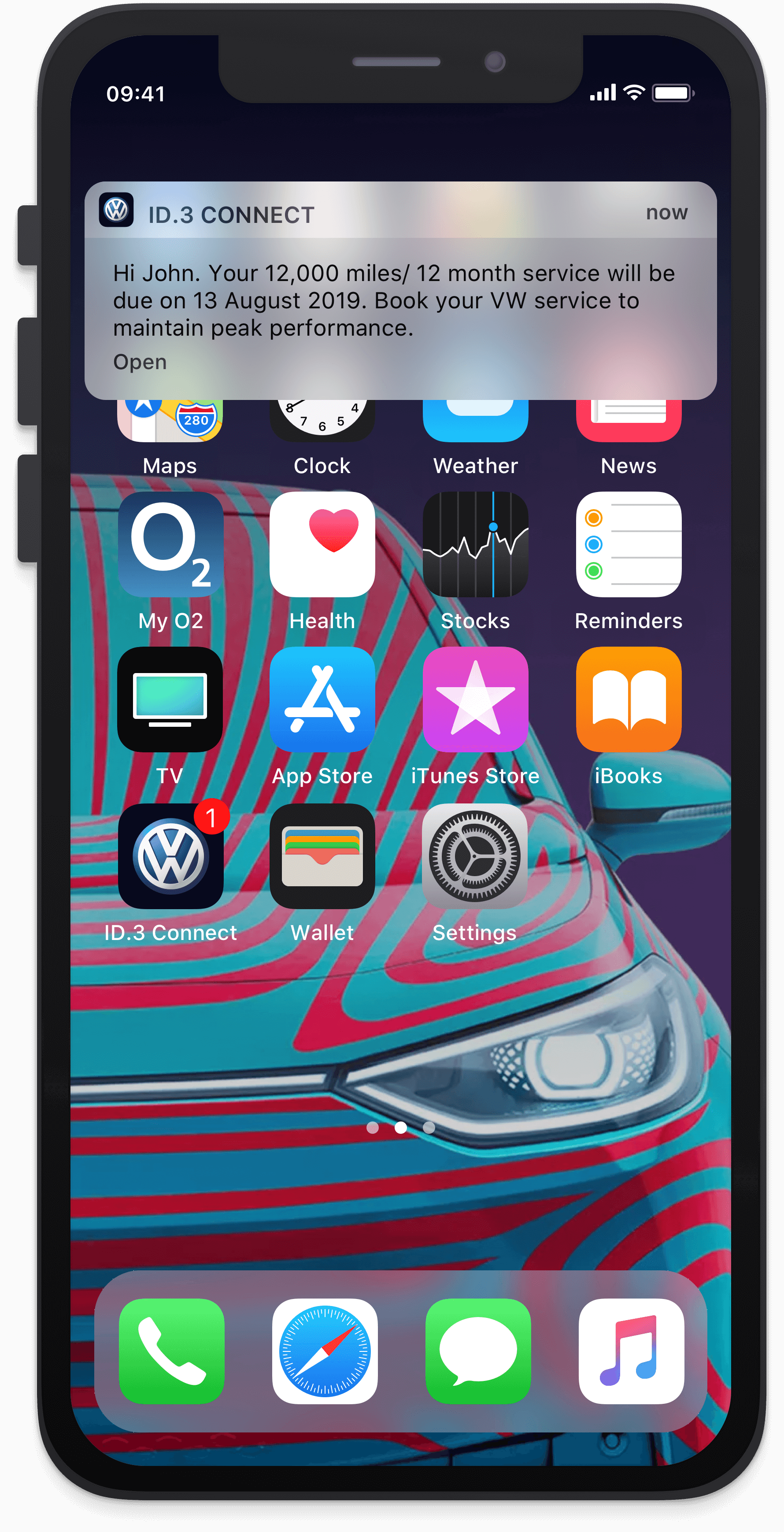 The service booking journey is centered around the user being notified on their phone to arrange an annual vehicle service. The App guides the user through a series of filtering questions determining the user’s specific needs; pick up location, appointment time and date, and courtesy car. If a courtesy car is required the App will invite the user to accept a higher model vehicle than their current vehicle. This not only fulfills the users need for a courtesy car but also acts as a test drive to push future sales for VW.

The user is given details of the vehicle service that is due.

The user is given details of their upgraded VW courtesy car.

The user is given confirmation of their appointment details and a reference code.